Want to build a purpose-driven brand? Start with your employees

‘Purpose’ isn’t a new concept for brands, but there’s no doubt it’s gaining momentum following the cataclysmic shift of 2020, now that we’re living in what’s been dubbed the  ‘Age of Purpose’.

Recently, though, the focus has shifted slightly from pre-pandemic conversations around purpose-driven brands to include deeper, more authentic dialogue around individual purpose – and how the two intersect

1. Brand purpose is the reason why a company exists

“Purpose is the reason why a company or a brand exists. It is the underlying essence that makes a brand relevant and necessary to its customers,” explains Bill Theofilou, senior managing director for Accenture Strategy, Advanced Customer Strategy and Competitiveness Center of Excellence. If a brand exists to solve a problem or meet a need, purpose should sit at the centre of a brand’s vision and inform every business decision.

For future-facing brands, purpose is more than a nice-to-have. Consumers increasingly support brands whose purpose aligns with their values and beliefs – and reject those that don’t. Nearly half (48%) who are disappointed by a brand’s words or actions on a social issue complain about it, 42% walk away from the brand, and one in five (21%) never come back. Perhaps that’s why, purpose-driven companies witness 46% greater market share gains and grow three times faster than the competition.

2. Employee purpose is the meaning individuals find in their work

Employee purpose is the sense of meaning employees find in their work and how their values align with a business. Increasingly, when it comes to choosing a job, people are looking for more than just pay or benefits: they want to do work that matters to them. Mckinsey found 89% of employees say they want purpose in their lives and 70% say their sense of purpose is largely defined by work. In fact, meaningful work is the single largest contributor to a positive employee experience.

For many, purpose has become more of a priority in the past year-and-a-half. Nearly two-thirds of employees say COVID-19 has caused them to reflect on their purpose in life, and nearly half say they’re reconsidering the kind of work they do because of the pandemic. (Looks like renegotiating remote-working policies isn’t the only way businesses will be forced to adapt in a post-COVID world.)

3. Brand purpose and employee purpose should be integrated

Often brands focus on creating and communicating an externally facing purpose, but fall short when it comes to involving all their employees. Research shows that while 85% of executives and upper management find purpose at work, only 15% of frontline managers and frontline employees feel the same.

But 65% of consumers are influenced to buy a brand, product or service by the words, actions, values and beliefs of a company’s employees… So, if your customer-facing team isn’t invested in your brand purpose, the chances are the message isn’t getting through.

If a brand’s purpose is what its founders identified as being wrong in the world and wanted to fix, employee purpose can be thought of in the same way. Though the two needn’t (and are unlikely to) be exactly the same, successful purpose-driven business will look for a way to integrate the two.

4. Putting the pieces together

As Mckinsey points out, this is the only thing you can directly control – so it makes sense as a starting point. But the way you identify your brand purpose is everything. Brand purpose isn’t something that should be discussed privately in boardrooms between the C-suite, then circulated as a memo. If you want employees to genuinely connect with your purpose, you need to involve them in the process.

Workshop questions like: Why does your brand exist? What role does it play in customers’ lives? What challenge does it solve? How would the world be different without it? If you already have a brand purpose, great. But it still might be worth revisiting for a sense check with your wider team – especially if it’s been around a while (and might no longer be relevant), or if it was originally imagined in a less-than-inclusive process.

Purpose is personal. If you want your employees to share theirs with you, you’re going to have to earn their trust. Mckinsey suggests creating a space for honest discussions about purpose to encourage your team to explore the topic for themselves. They identified nine types of values that guide individual purpose, which might be a helpful starting point (See graphic).

Much like marketing, great people management is about knowing what makes people tick – what inspires your team? What motivates them? What connects them to your particular company and mission? Once you have this insight, you can begin to integrate it with your brand’s purpose. 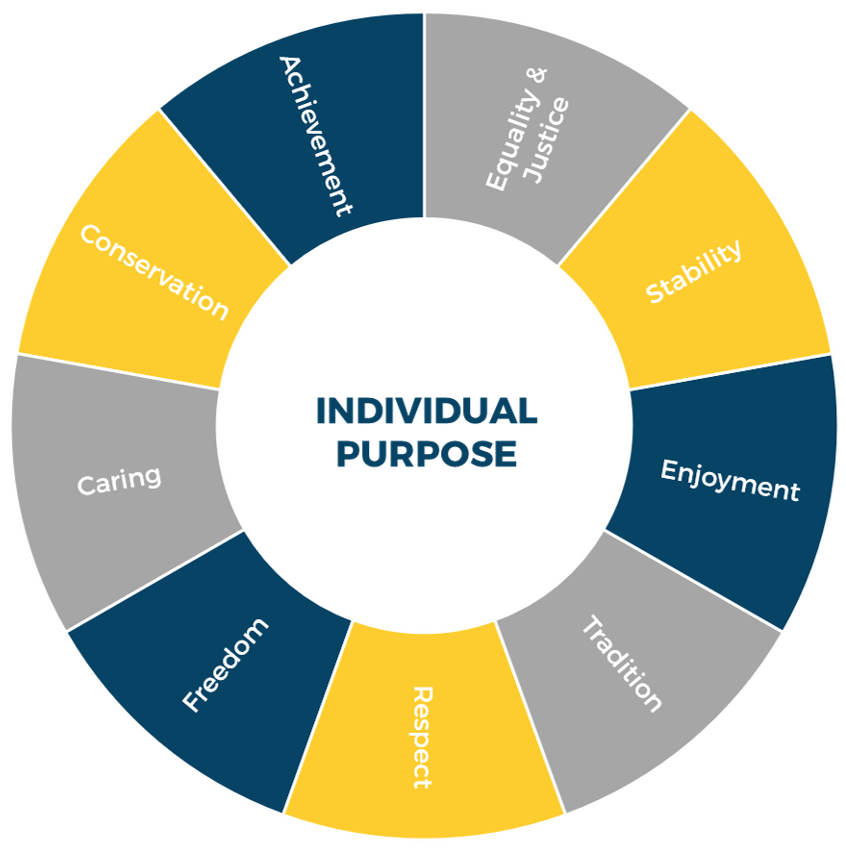 Now to bring the two together. There’s no point having a brand purpose that’s hidden away on a PDF somewhere: you have to activate it. As we established, a brand’s purpose should inform every business decision – from recruitment and onboarding, to goal-setting and strategy, to feedback and performance management. The more you positively expose your team to your brand purpose, the more likely they are to internalise it.

But you shouldn’t take an identical approach with every employee, or even every team. Use what you know about your individual employees’ purpose to create alignment between their values and the company’s. Create opportunities that appeal to them by tailoring projects, support, communication and coaching to suit their different needs and situations. Think about how you can make purpose a meaningful part of every task or interaction.

By helping employees find purpose at work, you’ll empower them to feel more fulfilled. And when their work is aligned with your brand purpose, that sense of fulfillment will ultimately benefit your company, too. 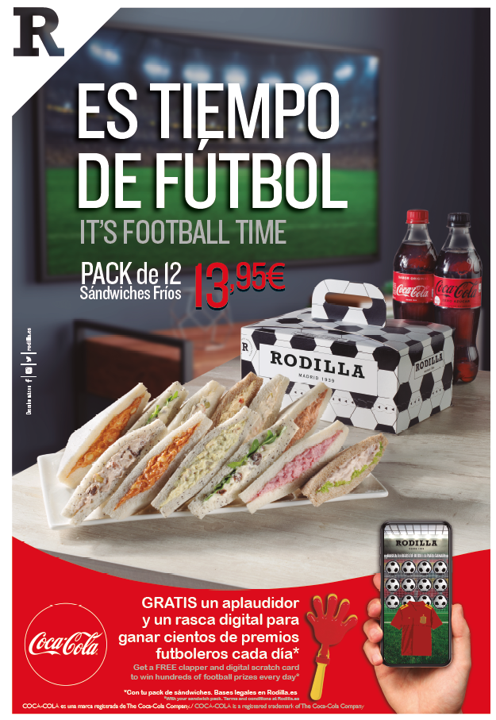 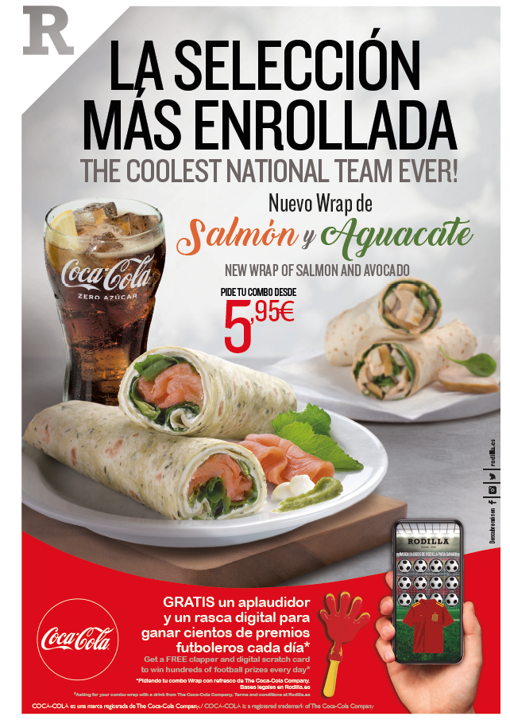 How Rodilla Restaurants turned into EUROdilla during the EURO 2020 and involved employees for a successful promotion.

Brand purpose forms the backbone of your marketing campaigns. If your team is invested in your purpose, they’ll be invested in making your marketing campaigns a success. Even the best campaign will fail if employees don’t communicate it properly or aren’t engaged with the promotion. Like RIX, Rodilla Restaurants  understand a great sales promotion embraces both consumers and employees.

What better moment than a large sporting event like the EURO 2020 to launch a promotion?

Throughout Rodilla’s 150 restaurants, customers were to ‘score a goal’ via a digital scratch card when they purchased a meal. If they scored, they would win exciting football-related prizes like shirts, footballs, barbecues and games.

But the promotion didn’t end here. For every score-attempt, points were given to that restaurant – creating a restaurant league that engaged both customers and employees.

The promotion was a huge success.  Rodilla exceeded their expected sales numbers and created lasting impact on their social media channels.

Unlike discounts, creative rewards are fully customizable. Collaborating with RIX allows you to incorporate all these tips for a meaningful sales promotion that not only increases sales and market share in the short term, but also boosts long-term engagement with your brand.

Get in touch for a free consultation. 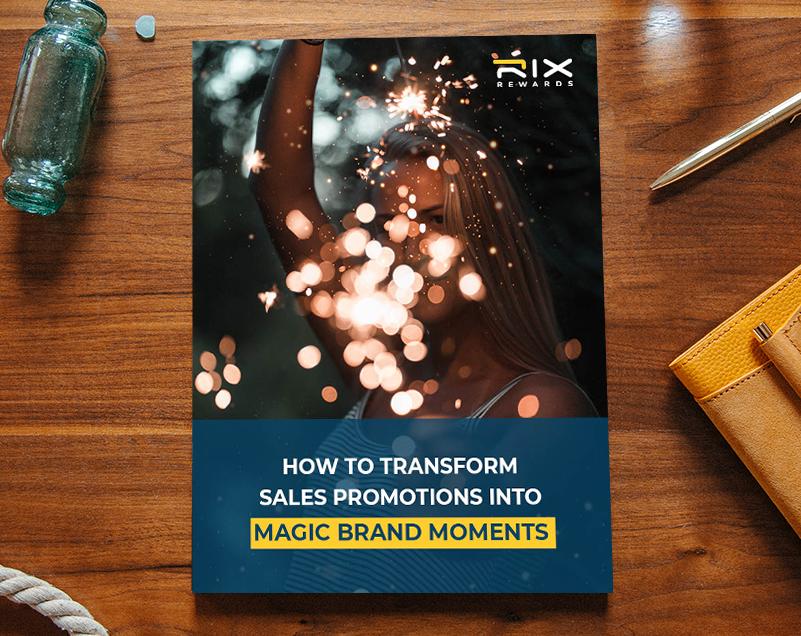