Your brain fools you every single day: here’s how to use cognitive bias to your advantage

Dubbed in 1972 by researchers Amos Tversky and Daniel Kahneman, cognitive bias is what happens when our brains take mental shortcuts – known as heuristics – in an attempt to process the world around us. These shortcuts are merely intended to simplify and condense the massive amount of input our brains constantly receive in order to make decision-making quicker and easier. But, in reality, they often result in the misinterpretation and omission of information that leads to deviations from logical thought.

Here’s the kicker: experiments have shown cognitive bias impacts our decisions, including what we buy. As a marketer, understanding cognitive bias gives you insight into how your target audience thinks – even if they don’t know it. This paints a clearer picture of how and why they interact with your brand, allowing you to tailor your marketing more effectively.

Problem is, there are a whole lot of cognitive biases. Wikipedia lists over 200, of which 188 are shown on the graph below. Trying to absorb and retain that much information will no doubt cause your brain to take its own shortcuts! Instead, we’ll take a closer look at five cognitive biases that are useful when you’re creating sales promotions. 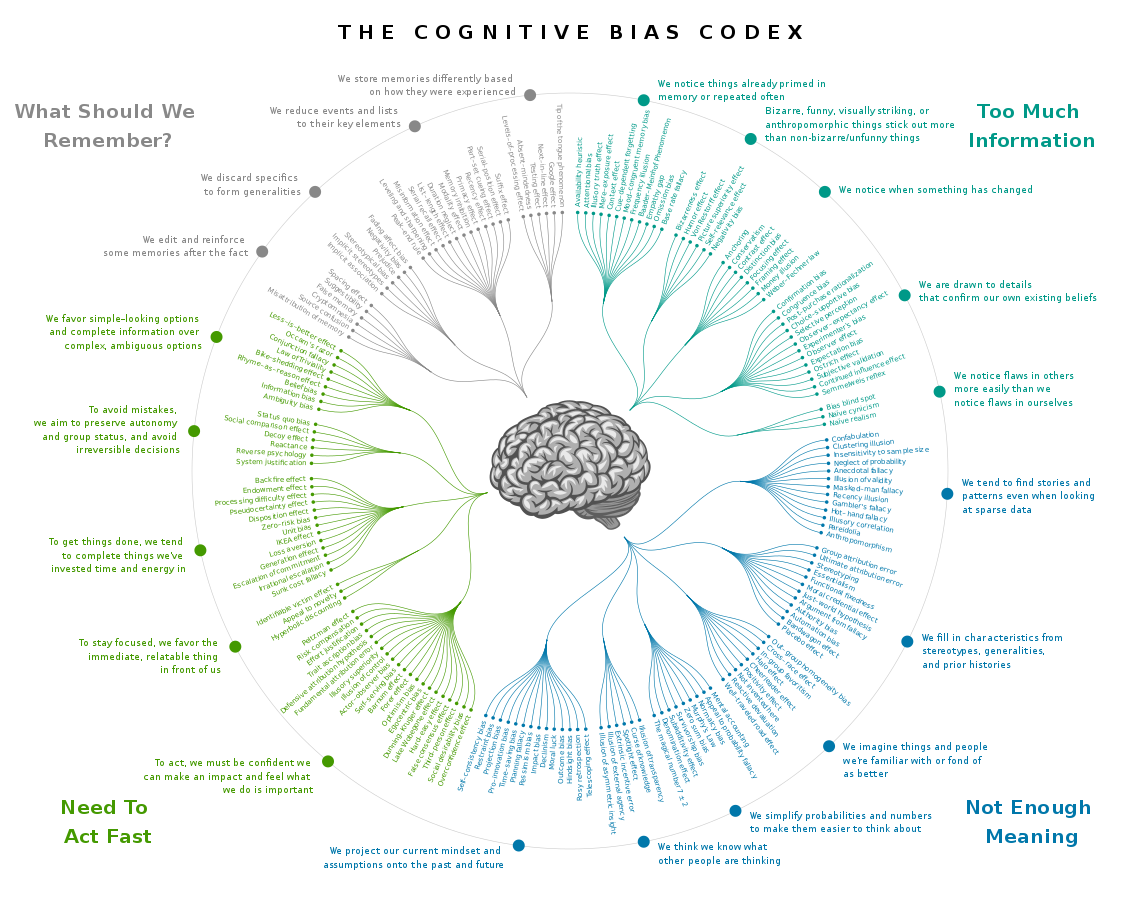 Explained: Humans have a tendency to focus on things that stand out or are emotionally striking in some way.

In action: This is the main aim of marketing: what can you do to stand out from the competition? When it comes to sales promotions, chiming in with the discount sales won’t differentiate your offering. Instead, focus on creating an emotional connection with your brand to give it unique appeal. Added to that, why not offer something extra for customers who buy your product in the form of a creative reward? It’s more affordable than you might think and creates a unique feature that separates your offering from the rest.

Explained: People draw different conclusions from the same information, depending on how that information is presented (or ‘framed’).

In action: Consumers are more likely to make a purchase based on the way a product is presented, so frame your offer in a way that shows passing on it will leave customers worse off. For bonus points, try framing its value in comparison to something similar (like your competition, perhaps). When it comes to sales promotions, our research shows rewards have a higher perceived value than discounts (even when they cost you the same) – proof that framing your offering in a different way can increase its appeal.

As a marketer, understanding cognitive bias gives you insight into how your target audience thinks – even if they don’t know it.

Explained: Named in honour of IKEA’s often-unassembled furniture, the theory is that “labour alone can be sufficient to induce greater liking for the fruits of one’s labour.”

In action: Avid readers of the RIX blog will know we’ve written about this one before. ​​When it comes to sales promotions, the IKEA effect advocates for encouraging active engagement from your customers to increase their investment in your brand. Unlike discounts, which are purely transactional, you can encourage customers to ‘earn’ creative rewards – for example, through gamification – and in turn create an emotional connection that boosts loyalty and increases your brand’s social currency.

Explained: Consumers are more likely to buy products preferred by their friends, family, colleagues, age-mates, or other people they identify with in some way.

In action: With any luck, you’ve already created customer personas that give you insight into who you’re talking to and how they identify or, more importantly in this case, who they identify with. Use this information when deciding on your tone of voice and imagery – consumers will like you more if you look and sound like their friend. Showcase customer testimonials that fit your target audience, and generate amplified word-of-mouth marketing to increase the impression that a particular group loves your product.

In action: Making consumers feel there’s little to no risk in buying from you will lower their barriers to purchase. Take note: studies show 48% of people feel safer shopping on a website with a trustmark, 24% find it difficult to trust a site that takes too long to load, and 46% consider not displaying contact details as untrustworthy. When it comes to reward promotions, RIX recommends making your terms and conditions crystal clear so customers don’t feel they might be caught out and planning plenty of resources for customer support.

Using cognitive bias in your marketing isn’t about manipulating consumers – it’s about building a deeper understanding of how they think and working with their brains, rather than against them. This helps you build stronger relationships so you can create magic brand moments that benefit both your customer and your brand. (No smoke and mirrors here.)